No one knows why the lights of the world went out. Why the sun suddenly flared up, scorched the Earth in a split-second incandescent flash, then faded. Why it became a dull orange-red color, cool and distant, and only just warming the planet. Only just holding back an eternal, icy night.

No one knows why power stopped. Why the cities went black when the sun faded. If it was the solar flare that did it, or if electricity had simply fallen to whatever had dimmed the sun. No one knows why it all went away.

It’s been 50 years since the Flare. Your community can take care of itself now. Maybe it pulled itself out of the ashes and ruin that came in the wake of everything changing. Or maybe it was built on top of the rubble of older cities, older communities, that turned and ate themselves when the sun rose different. Either way, life will out, and people will find a way to survive.

So you live on an island in the sea of a dark country, knowing only the people of your community, and the stories of the few travellers who brave the blackness. Your world is only as large as the walls of the community.

Or you did, until the computer came to life.

Until it whirred, and clicked, and found power where none had been.

Until the screen blinked on, and bright while words began to print themselves across it.

You were alone, until messages began.

When the Messages Began is a 2-player role playing game of digital exchanges.

The Receiver is a member of a functioning community built in the ruins of the post-Flare world.

The Sender is a string of words appearing on the screen of a long-dead computer.

Receiver and Sender, knowing each other only through what they write, communicate in the hopes of learning who exactly the other is, and how they can be used to further their own goals.

In order to download this game you must purchase it at or above the minimum price of $5 USD. You will get access to the following files:

When the Messages Began.pdf 3 MB

Support this game at or above a special price point to receive something exclusive.

To the waters and the wild

In the spirit of valuing the creative labor of game writing, I am choosing to charge for my games rather than list them as pay what you want.

But more than anything, I want people to be able to play them. So if finances are a barrier, please go ahead and download it for free.

I’d be glad to help you out, but I don’t quite follow your question. The pdf should be the full rules for play. Can you let me know what difficulties you’re having?

This is so good !! I recommand it.  I played it with a friend and the concept is really innovative and fun. 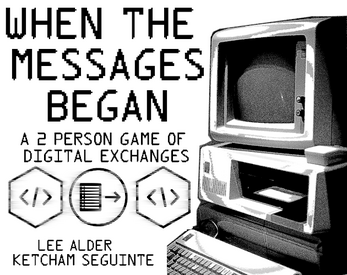