Colloquially, the term Resistor refers to an individual who uses subterfuge to deliberately disrupt the normal function of political, corporate, or economic operations in order to achieve a goal." - "Resistor" Netpedia article, n.d.

You have reasons for everything you do.

There are reasons you broke into that downtown San Angeles backing network, and "redistributed" millions of INC.

There are reasons you stole the blueprints for that new JACK from PosiTech, and sold them in a NetSpace auction.

There are reasons you inserted code into that Script, and got access to the wetware of the CorrecSec deputy director.

In fact, there are so many reasons that you've lost track of them. Maybe they're ideological. Maybe political. Maybe you're just acting out. The answer you give changes, depending on the day.

But really? No matter what you tell your 'Rents, CorreSec, or yourself, there's just one reason. There's on one explanation for why you divert, redirect, and change. One reason for why you do what you do.

Whatever you've told yourself, this is the truth-- you are a Resistor.

And the purpose of a Resistor is to disrupt the current.

Resistor is a near-future cyberpunk game about angry teens with brain computers. A strange mix of corporate spy and punk rock rebel, military-industrial mercenary and social justice advocate, Resistors are children of a new normal. Everyone's already plugged in and turned on. NetSpace has put the worlds in their heads. If they want to change things, they've got to get creative in their rebellion. But if there's anything teens are good at, it's rebelling.

A mechanics-light game, designed for flexible, low-prep play, collaborative world building, and character-driven storytelling, Resistor is centered around classic, tech-laden cyberpunk tropes. Take what you like, throw away the rest. Every rule is made to be broken.

Welcome to the neon grime of the streets of San Angeles. Here it's high school, low life.

Just want to check out the system and get a feel for how it plays? 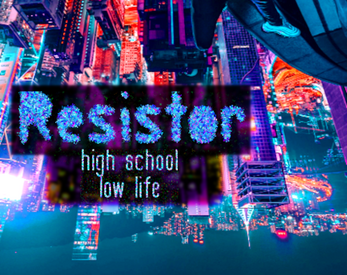